IT Dept. asks taxpayers to complete this pending work

Income Tax Department has urged taxpayers to complete an important task. Taxpayers who are yet to accept the Tax Audit Reports (TARs) submitted by their Chartered Accountants (CA) must complete the process of submission,the Central Board of Direct Taxes (CBDT) said in a statement.

“The Department expresses gratitude to all tax professionals and taxpayers for their support in compliance and requests the attention of taxpayers who are yet to accept the Tax Audit Report submitted by their CA to complete the process of submission,” CBDT stated.

More than 29.8 lakh major TARs have been filed on the e-filing portal of the Income Tax Department by February 15, 2022, the CBDT stated.

Income Tax India tweeted “More than 29.8 lakh Tax Audit Reports filed on ITD’s e-Filing portal as on 15th February, 2022. On the last day, over 4.14 lakh Tax Audit Reports/Statutory Forms have been filed. ITD acknowledges the efforts of our taxpayers & professionals in fulfilling the compliances on time.” 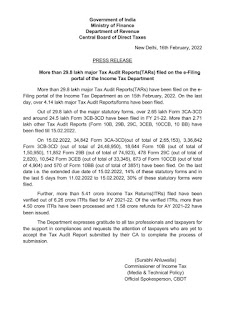