Consumer Court is a special purpose court which deals with cases related to consumer disputes and grievances. These are set up by the government to protect the consumers’ rights. Its primary function is to maintain fair practices by sellers. A consumer should have proper documents for filing a case.

To protect consumers against such acts of traders, certain laws were enacted by the government. One such special act to safeguard the interest of innocent consumers is the “Consumer Protection Act, 1986”.

Any consumer who is betrayed by the trader and denied his/her rights can lodge a complaint against the trader under this Act. A consumer is any person who has purchased goods for a certain value of money for self-consumption. A consumer himself can file a complaint or through a legal representative. (The Act itself identifies the eligible consumers and the list of persons who has the right to file a complaint on behalf of the consumer).

What is a consumer court?

Consumer rights are protected under many Acts such as The Indian Contract Act, Sales of Goods Act etc. In the event of a violation of a consumer’s right, the aggrieved person’s course of action is to file a civil suit which is extremely expensive and time-consuming.

The Consumer Protection Act, 1986, on the other hand, is an Act passed to expressly protect the rights of a consumer and his interests. Under this Act, statutory bodies known as Consumer Courts are established to deal with suits filed by consumers.  The objective of establishing consumer courts is to reduce the expense and time of the consumer in the course of him seeking redressal. Consumer courts are divided into three tiers namely, district forum, state commission and national commission.

Given below is the hierarchy of forums, where a consumer complaint is filed based on the value of the transaction: 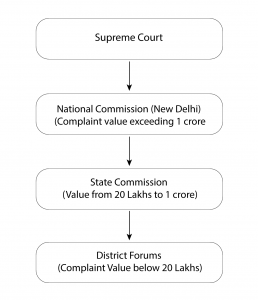 Consumer: the act defines a consumer as a person who has purchased any goods or services for some value. It also includes a person who himself did not purchase goods but used the goods with the permission of the buyer and goods that were bought for self-employment and not for resale.

A voluntary organization registered under the Companies Act, 1956

One or more consumers having the same interest.

Beneficiary to the goods/services of the consumer

Legal representatives of a deceased consumer

Legal representatives of heirs of the deceased consumer

After this one must first contact the trader and inform him of your grievance and request for replacement or refund.  If ignored or if allegations are denied then you move on to the next step.

Procedure to file a complaint

The second part after confirming whether you can file a plaint is the process. The Consumer Protection Act has provided for a simple and easy process for the filing of a consumer plaint. The procedure to file a plaint does not require the hiring of a lawyer and can be done by oneself even without a legal background. To file a consumer plaint these are the steps to follow.

In filing a plaint identifying the jurisdiction is the first step. Both pecuniary and territorial jurisdiction has to be taken into account.

Depending on the amount pleaded and the court one is filing, i.e district, state or national a fee has to be paid.

The plaint must contain facts that establish the cause of action

The plaint must contain the name, address and description of both the complainant and the opposite party.

In the plaint attach all bills and receipts supporting the claim and also attach the notice sent to the trader requesting to rectify the goods.

The amount asked for can include compensations including litigation fees, interest, refunds, damages etc. The break up of the total amount is required.

Must include statements of the jurisdiction of the court it is filed in and also statement of what relief is sought after.

The limitation period is 2 years from the time when the cause of action arises if filed after this period one must explain the delay which may or may not be condoned by the court.

One must file 5 copies of the plaint in the court for each opposite party and also must include an affidavit stating all facts stated are true.

Sample of the Affidavit for Reference